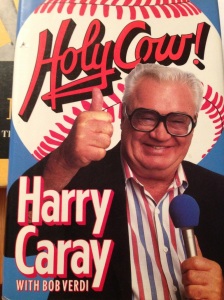 Harry Caray is most known for being the announcer for the Chicago Cubs in the 1980’s.
Photo from cardboardicons.com

One of Chicago’s top dining destinations is Harry Caray’s, a restaurant dedicated to the legendary Chicago Cubs’ announcer. The late broadcaster was known for leading the crowd in “Take Me Out to the Ballgame” during the 7th inning stretch at Wrigley Field, and his popular phrase, “Holy cow!”

If you’re looking for some good food, Harry Caray’s is the place to go, and also has three different locations around the city. This famous Chicago hot-spot has been named “Best Italian Steakhouse” by the Chicago Tribune Dining Poll, according to the restaurant website. There is a lunch and a dinner menu, each containing a wide variety of options:

While Harry Caray’s is known for having amazing food, they’re also famous for their large baseball memorabilia collection.

Harry Caray’s has a formal dining room, as well as a sports bar.
Photo from roadfood.com

As soon as you step inside the restaurant, you’re instantly surrounded by baseball memorabilia, including pictures and newspaper clippings. Harry Caray’s.com states that their baseball collection is “one of the most extensive in the world.” It’s every sports fan’s dream! Here, you can see Harry’s famous over-sized glasses or the well-known “Bartman Ball” from the Cubs’ 2003 playoff run.

Not a Cubs fan or sports person in general? Don’t worry, there’s other memorabilia as well that everyone is sure to enjoy, such as a pair of Elvis Presley’s sunglasses. Bet you didn’t know “The King” was friends with Harry Caray, as the restaurant website states.

While the dining options range from casual to business, Harry Caray’s also has a bar where guests can enjoy a drink while watching the Cubs (or whatever game interests you) on one of their many plasma TVs.

If you’re ever in Chicago, you absolutely must eat at Harry Caray’s. Between the fun, friendly atmosphere, and the amazing food, this restaurant is sure to be a favorite for everyone.

For more information about Harry Caray’s, including the full lunch and dinner menus, visit their website.